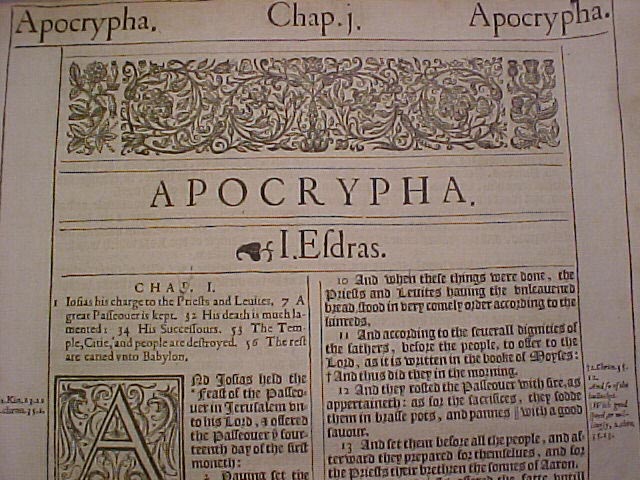 One of the dividing lines between Protestants and Roman Catholics is their view regarding the Apocrypha, primarily the OT Apocrypha books. For those that are unfamiliar with the debate, the Apocrypha is a collection of books that were written between the end of the Old Testament and the beginning of the New Testament (around 4th century BC to 1st century AD). There are also New Testament Apocrphyal books, such as the Gospel of Thomas or the Apocalypse of Peter, but both Roman Catholics and Protestants reject these are canonical.

For Christians, books of the Bible are canonical in the sense that they are regarded as sacred, written by human authors, but breathed out by God (2 Timothy 3:16). In this regard, both Protestants and Roman Catholics view the 66 books of the Protestant Bible as Scripture, while the Roman Catholics include the Old Testament Apocryphal books as well (such as 1 & 2 Maccabees, 1 Esdras, Judith, Tobit, the Wisdom of Solomon, Sirach (Ecclesiasticus), Baruch, as well as some smaller works and even some additions to existing canonical books). Why then do Protestants (we) not regard the Apocrypha as Scriptural or canonical?

If the Old Testament apocryphal books were regarded as Scripturally and canonically valid, we would assume that contemporaries of their writings would regard them as such. Historically, this is simply not the case. As Michael Kruger notes:

Although these books were known and used among the Jews of this time period, there is little evidence to suggest they were regarded as Scripture. Neither Josephus nor Philo—key sources for our understanding of the scope of the OT canon—used them as Scripture. In addition, no NT author (most of whom were Jews) cites even a single book from the Apocrypha as Scripture. And later rabbinic writers do not receive the Apocrypha, affirming only the Hebrew Scriptures as part of the Jewish canon (b. Baba Bathra 14–15).

Even after the early Jews rejected the Apocrphyal books as canonical, early Christians in the 1st and 2nd century did not regard the Apocrypha as canonical. In fact, it wasn’t until the 6th century that Augustine argued for its inclusion, which was later confirmed in the 16th century at the Council of Trent. Therefore, for the first 1500 years of Christian Church History, they were not included as Scriptural or canonical.

Helpful But Not Scriptural

This is not to say that the OT Apocrypha is not helpful in any regard; I simply wish to communicate that it is not Scriptural or canonical. The Apocrypha gives us a view into the world of the inter-testamental period (the time between the Old and New Testaments). It helps us, like a good history textbook, to understand what was going on in the current political, social, and culturally moments of the time. It also helps us understanding the 1st century Jewish context more, as there were 400 years of historical development between the last writing of the Old Testament and when Jesus was born.

So, can we learn from the Apocrypha? Absolutely. Should we treat it as equal to the rest of the 66 books of the Bible? No. Early Jews, Christians, and Church Fathers did not regard these books are canonical and we would be unwise to reject their conclusions. Again, Michael Kruger is helpful:

The story of the OT and NT canon is a story that also involves “other” books. These other books have been a point of contention and controversy at various points within the history of Christianity. Moreover, these other books can raise concerns for modern day Christians who might wonder whether they’ve been improperly left out.But the historical evidence suggests we can have confidence in the content of both the OT and NT canon. Despite many years of wrangling over the OT Apocrypha, the Hebrew canon handed down by the Jews still stands as the Bible known by Jesus and the apostles and therefore is properly regarded as Scripture. Likewise, even though there has been much talk about “lost gospels,” these texts were written much later than our canonical ones and have little claim to historical authenticity. Thus, our biblical canon is complete. As Origen declared, “The net of the law and the prophets had to be completed . . . And the texture of the net has been completed in the Gospels, and in the words of Christ through the Apostles” (Comm. Matt. 10.12).