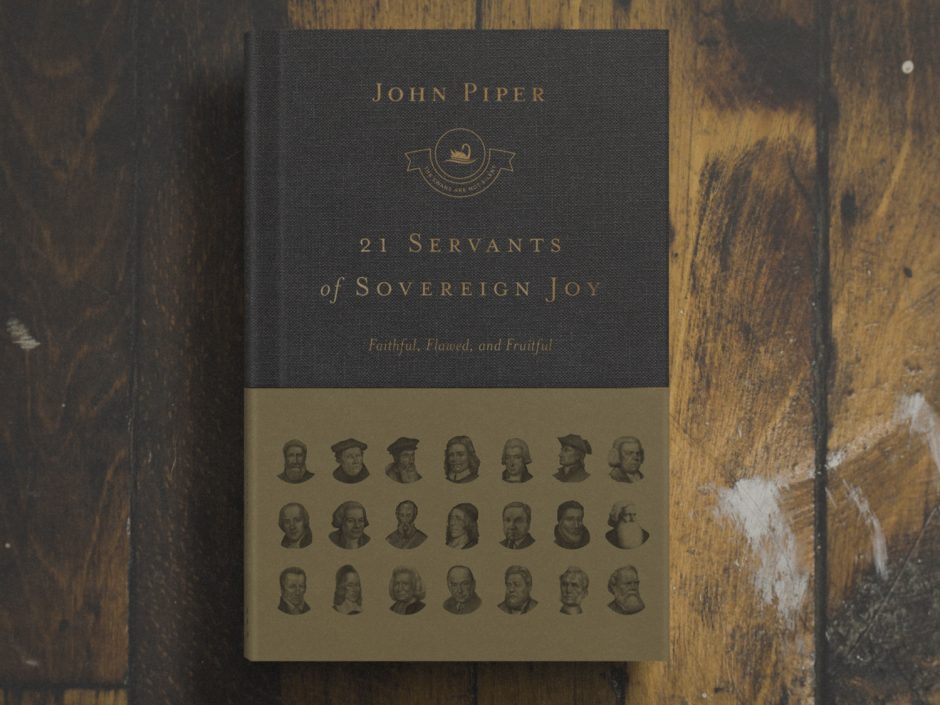 I remember hiking the mountains of Northwestern Wyoming and sitting awestruck at the vistas of God’s creation—mountains, lakes, trees, wildlife, and fresh, crisp, mountain air. Few places can arouse such feelings of awe and transcendence in my body than trapped deep in the forests west of the Mississippi river. I remember at one point, resting at a lake, with dozens of mountains shooting up like pipes of an organ, and simply thinking, “How could anyone ever capture the beauty and complexity of a view like this?” The shades of purple, brown, green, and white on the mountains, the ripples in the water, the craggy peeks, and the sense of isolation and trepidation that is formed only when staring at something so unique that appears to belong only in fiction novels. A similar feeling rushed over me when I picked up John Piper’s latest book, 21 Servants of Sovereign Joy: Faithful, Flawed, and Fruitful. How can one book contain the depth, complexity, and assiduity of these mountain of men? How can one book contain the lives and stories of people like Owen, Spurgeon, Augustine, Calvin, and Tyndale, and not trickle off into thousands of pages? While the book will not give you a comprehensive picture of each person, Piper has presented some of the most key historical figures in Christian history in suitable space, drawing out the unique contributions and themes present within each person’s life.

A theme that unites the entire book surrounds a story concerning Augustine and his passing of the baton to Eraclius, his assistant in the ministry. When Eraclius stood to preach at the transference ceremony, he felt a sense of inadequacy and proclaimed, “The cricket chirps, the swan is silent”,[1]with Augustine as the swan. As Piper points out, “[f]or 1600 years, Augustine has not been silent,” deeming him the great theologian who “shaped the history of the Christian church.”[2]Therefore, as Augustine has influenced many of the Christian leaders, it is fitting that Piper would begin his work with the swan himself.

Structurally, Piper’s book is divided into seven sections surrounding a particular theme.  These sections include three historical figures in each division. Each section has its own introduction and conclusion which provides an overview of the theme that Piper will draw out from the historical figures. For example, section four is devoted to Athanasius, Owen, and Machen, which are all read through the lens of orthodoxy amidst controversy. In this way, Piper can deal with the characters not in full but with a particular emphasis in mind. Lastly, Piper does an excellent job of blending in quotes (sometimes, quite lengthy) from the authors while at the same time adding commentary of his own. You really get the sense that you are reading both Piper and the character he is describing.

Those familiar with Piper’s writing will find that this work is similar in language to his others—saturated with language surrounding God’s glory, our joy, and the doctrines of grace present within the Scriptures. While you will certainly be learning about some of the main influences in Christian history, you will also be drawn to worship the God that these figures worshipped. The book does not simply recount facts—rather, it shows, with rich theology, the God in whom some of these men found worth dying for. You will read of men whose works will fill the best libraries, whose tales will inspire the next missionaries, whose humility will soften the proudest heart—and they will do so all surrounding one subject: the glorious Triune God—Father, Son, and Holy Spirit.

When discussing history, it is all too easy to worship our heroes’ strengths and to minimize their failures, perhaps even rarely discussing them. Piper does not fall prey into this temptation. Again and again, the figures are exposed for what they are: humans that are desperate sinners in need of grace, who at times make terrible mistakes. When reading the accounts of these men, although their influence seems so unattainable for more us, you are actually drawn more into the humanity of these men. From Calvin’s scandal with Michael Servetus to Martin Luther’s anti-Semitic comments, Piper presents the men in their true colors, faithful and flawed. Furthermore, you are also given glimpses of the humanity of these mountain of men—John Owen who suffered the loss of eleven children and his wife, David Brainard’s physical afflictions, William Cowper’s depression, and William Tyndale’s immense persecution. The men that we study are not so distant that they cannot relate, for they all have the blood of Adam running in their veins like us.

While some may be intimidated by the size of this book, I found myself captivated by the stories of these men who have walked before us. I remember planning one night to devote thirty minutes to this book and wound up reading two hours on accident; I simply could not put the book down. I was drawn into the lives of these men who knew God in a way that almost seems foreign to modern day evangelicalism. With every story, I was a fly on the wall in the execution of Tyndale, the preaching of Whitfield, and the pipe smoking of Lewis. Those who are fearful to pick up this book due to the size will be pleasantly surprised that not only is it incredibly readable, it is highly engaging.

For those looking for an introduction book surrounding some of the key figures of Christian history, I would heartedly recommend John Piper’s new book, 21 Servants of Sovereign Joy. Again, the book will not give you mastery of each person, but it will give you a comprehensive picture of their lives. Perhaps one of the best things you could do this year is read about the way God has been faithful in preserving the writings and stories of men like these. You may find that as you discover more about our Christian heritage, you will be amazed at how merciful and gracious, transcendence and sovereign, beautiful and stunning that our God truly is.