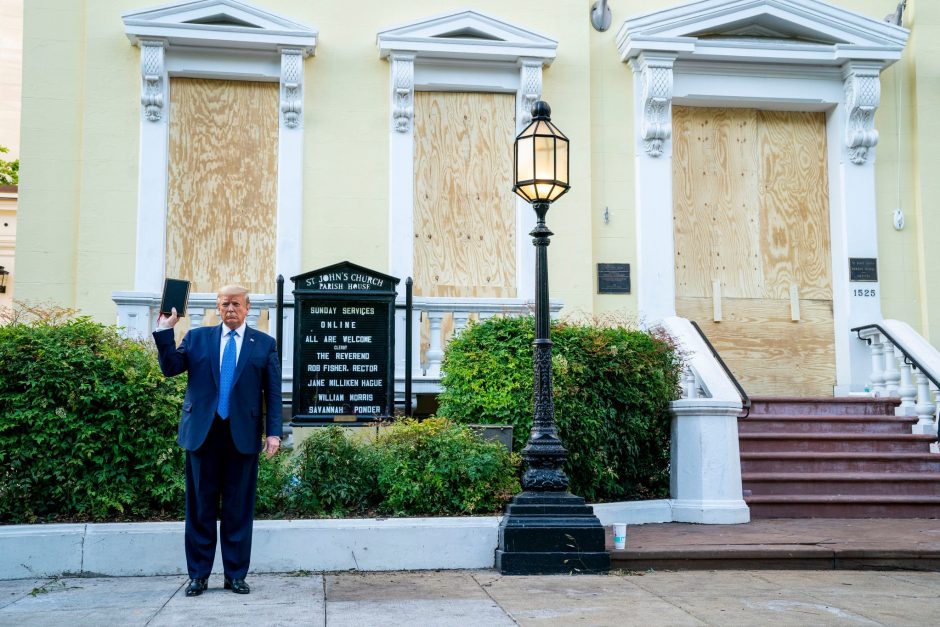 The mingling of politicians and religion is always a recipe for impure motives and unclear intent. Is a man or woman (in this case, a politician) simply using religion (or elements of religion, such as the Bible, churches, etc) to garnish their political reputation or to gain a favor with a particular stream of voters. While it is always dangerous to speculate on motives, President Trump’s posturing before St. John’s Church with Bible in hand is an egregious use of the Bible and the God of the Bible. Lest we forget, God is after his own glory, rather than the aggrandizing of our faux-glory.

Rather than yielding the Bible as the word of life (Phil 2:16), Trump decided to pose for a photo-op right after dispersing innocent protestors with tear gas, flash grenades and rubber bullets. The irony, the ugly irony, is right before our face. As we come face-to-face with the Word himself, we discover that in this political stunt, our current President was not following alongside the path of Jesus, who, though he was in the form of God, humbled himself. In a moment where the President could have spoken words of hope, encouragement, and courage to a nation suffering and aching with racial tension, he chose to further drive a wedge between our nation with the very thing that can bring us together: the peace and love of God found in the Scriptures. Make no mistake, God or the Bible cannot and will not be used as a prop for man’s ambition and glory—it always has and and always will be about the supremacy of God over all things.

Sadly, again, because politics and religion have become enmeshed in our country, Christians in our current era are enamored by a President who holds the Bible but sadly, in many cases, does not love the Bible or walk in accordance with the Bible. Growing up in conservative, evangelical churches the majority of my life, I have seen over time the real implications of John’s exhortation, “Little children, keep yourselves from idols” (1 John 5:21). The danger before us is to wholeheartedly defend a political candidate as spiritually competent because they support our ethical and moral convictions. The threat is ever before us: will our allegiance belong to America or to Yahweh himself? This is not to say that we must pound Trump with our words, or to wish ill upon him, but it should make us speculate whether or not we have fallen into idolatry. We should love our country, pray for our leaders, and serve our nation with honor, but lest we forget who the true King is, we may easily find that America becomes our house of worship, not the temple of the Lord.

The Bible that Trump holds in his hand will not be used as a prop; it contains the story of the Triune God who rules and reigns over all things. Thankfully, in Christ, all who belong to God are now joint-heirs to the kingdom that is coming. As we celebrate and worship the slaughtered, risen, and victorious Lamb of God, may we remember that “one day America and all its presidents will be a footnote in history, but God’s kingdom will never end.”