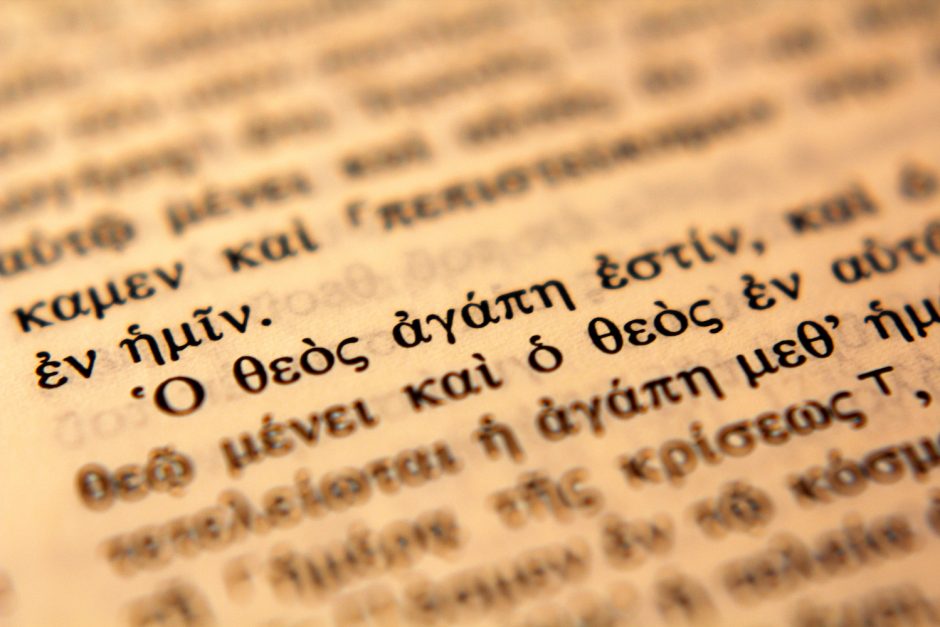 The preservation of the biblical text is a tenant of orthodox Christianity. Since the Bible was written not in English but in Hebrew, Aramaic, and Greek, scholars have often wrestled with how to translate the biblical text in a way that is both faithful to the original while at the same time communicating relevantly to its audience. Regardless whether one is translating a biblical text or a non-biblical text, translation is an incredibly difficult task. We are all aware that certain languages have particular phrases, idioms, and word pictures that are simply hard to translate, despite the translators best attempts.

In the English language, we are privileged with several excellent translations, such as the English Standard Version (ESV), the New American Standard Bible (NASB), the New International Version (NIV), and several others. These translations are often considered literal translations, or, more specifically, formal-equivalence translations, by which translators attempt to translate each word in the original language to an equivalent word in the English language. A different translation method is called the dynamic-equivalence approach, which seeks to message/meaning of the original language into equivalent modern English. For conservative evangelicals, we tend to pride ourselves on choosing and reading translations that are deemed literal, implying the preservation of the very words of the original.

Yet, the reality is that while often we are forced to choose between the two translation methods—because of the complexity of translation work—both approaches are actually appropriate in certain circumstances. In other words, there are instances when a literal translation, while correct in theory, is not sufficient in actually communicating the original meaning.

An analysis of Luke 22:31-32 shows this premise in action. Consider the rendering that the King James Version (KJV) puts forth:

31 And the Lord said, Simon, Simon, behold, Satan hath desired to have you, that he may sift you as wheat: 32 But I have prayed for thee, that thy faith fail not: and when thou art converted, strengthen thy brethren.

Now, look at the way the ESV translate the verse, which is the translation I often use:

31 “Simon, Simon, behold, Satan demanded to have you, that he might sift you like wheat, 32 but I have prayed for you that your faith may not fail. And when you have turned again, strengthen your brothers.”

Now, a comparative reading of the two texts would seem that both are virtually identical, except for the updated language in the ESV; but there are some difficulties with the ESV’s rendering. You see, the King James was written in a time in which English speakers still used the second plural form (you) and a second singular form (thy/thine), which means that the KJV can actually translate the text in a more accurate manner. You will notice in the KJV’s translation, the you (ὑμᾶς) is plural in verse 31, whereas in verse 32, Jesus begins to address Peter specifically with thee, thy and thou (σοῦ). If you read again the ESV’s translation, you will notice that in English, both verse 31 and 32 simply read “you.” While this technically is the literal translation (since we don’t have a plural you in modern English, unless your from the South and you use “y’all”), it is not sufficient for the intended meaning of the text. In this way, the formal-equivalence method fails us.

Turning to a different translation, we notice that the NIV actually captures the original meaning of the text through the latter approach (the dynamic-equivalence method):

31 “Simon, Simon, Satan has asked to sift all of you as wheat. 32 But I have prayed for you Simon, that your faith may not fail. And when you have turned back, strengthen your brothers.”

You will notice that the NIV appropriately captures the meaning of the text by translating the plural “you” in verse 31 with “all of you,” while translating the singular “you” in verse 32 with “you” and “your.” Proponents of literal translation may fault the NIV for adding words into the text since the words “all” are not in the text. Yet, the evidence suggests that the NIV is actually more faithful in rendering the intended meaning of the Greek. In this way, literal biblical translations, while helpful in many scenarios, are also unhelpful in other scenarios.

Question #3: How many persons are there in God?